The definitive guide to betting on football by Kevin Pullein 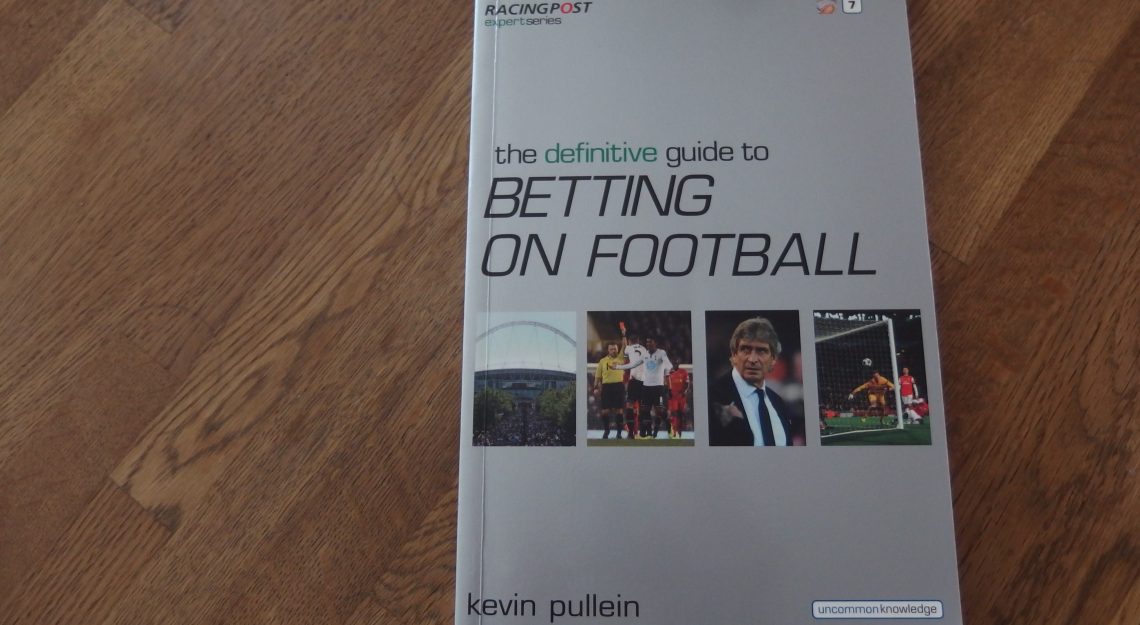 The definitive guide to betting on football by Kevin Pullein

This is one of the books from Racing Post Expert Series. For non-British readers, Racing Post might not ring the bell. Racing Post is the biggest British print and online newspaper about betting founded in 1986. Even though horse and greyhound racing take the lion’s share, football is not forgotten here too.
Having lived in the UK for a couple of years, I still remember every August I was looking forward to 100+ pages issue about all British leagues: analyzes and tips for the upcoming season.
But enough about my memories. Let’s go back to the book and its author.

About the author: Kevin Pullein is Racing Post expert with extensive knowledge about football betting.
A brief review of the book: in his book, K.Pullein explains how you can work out what is likely to happen during a football match and how you can use it for betting purposes. In each chapter, there will be both theory and practice, in separate but complementary sections. The theory is simply explained and illustrated, and satisfies both the specialists and less-experienced readers. Topics include first and second half betting, corners, bookings, final results, first goalscorer, spread betting and betting exchanges.

Personal opinion about the book: the book was published in 2009, so some of the information is a bit too old to exploit bookmakers nowadays but gives you some good ideas how markets are priced up and where you can find value. A lot of information based on old stats but suggests you how you can create your own formulas for specific league or league you follow the most. Most interesting part is about bookings and corners. Markets which can be exploited even today as bookmakers pay less attention to so-called secondary markets.
While trying to find more information about the author I found some negative comments about him being shitty tipster (Kevin Pullein was also running a tiping service). Comments probably were left by some unhappy clients who had no idea how to control their bankroll. One of them went all the way and even left such comment on Amazon page next to this book. At first, I couldn’t believe he is serious and had to read it twice. Obviously, he should blame himself first, not a tipster.

I say this from experience. At a loose end one night, I stumbled into a bookmakers, and after blowing £200 on the greyhounds I read the Racing Post, desperate for a tip to win my money back. And it was there I found Kevin, whose kind words and beautiful prose, over the course of multiple paragraphs, convinced me that AS Bari were absolute certainties at home to some other Serie B side. Convinced of this outcome, I lumped on, went home, and went to bed.
The next day I was in shock. A final score of 1-1. How could he be wrong? His advert for football tips described him as “feared” by the betting industry! I was at least thankful I hadn’t spent a fortune ringing up his premium tipline.

Negative comments aside, personally I really enjoyed the book. I have got more than I expected. From every book you can learn something and this one for sure will help you in the future with your betting.
One of the quotes by Kevin Pullein which caught my eye is below. I absolutely agree with him that couple of players in the top team doesn’t mean so much as all punters expect. Keep it in mind unless you have your own opinion about it.

When a team changes a small number of players, however, the impact on performance levels is often less significant than you might think. Take the example of Steven Gerrard at Liverpool. If you asked English football followers in the summer of 2009 to name the Premier League player those absences would have the biggest negative impact on his team, the most popular answer would probably be Gerrard. He is totemic player. In the five seasons since Rafa Benitez became their manager, Liverpool have won 58% of the Premier League games in which Gerrard started and 56% of the games in which he played no part – a difference of just two per cent.
The point here is not that Gerrard is not a good player – he is a very good player – but that even the best players, on their own, contribute less to a team than you might imagine. If anything, people tend to overreact rather than underreact to the announcement of line-ups.

Price: you can find it on Amazon for less than 10 euros with delivery. Always check used books, usually, they are in perfect condition but much cheaper than new.

4/5 – very good value for money and important for your betting knowledge improvement. Enjoy!

For the best deals on this book, click the picture below: